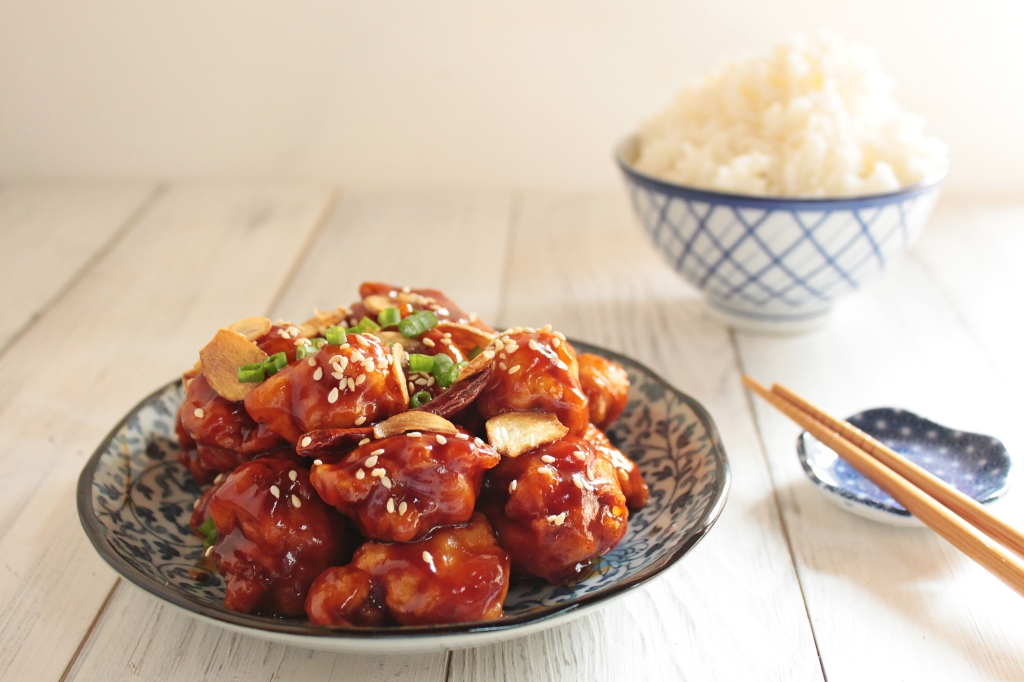 The Search for General Tso, which was released in 2014, directed by Ian Cheney, and produced by Jennifer 8. Lee and Amanda Murray, traces the origins of General Tso and his eponymous chicken in the United States. To find the man behind the chicken, the film relays the social history of Chinese immigration in America, which is integral to the history of Chinese food in the United States. The film raises debates on issues prevalent in food studies, such as authenticity and adaptation for mainstream tastes, and is timely in the questions that it raises around diasporic communities and foods.

The mythology behind General Tso’s Chicken stems, in part, from its name, given that it sounds like a dish cooked for a General named Tso. General Tso’s chicken is made with dark meat: usually the legs, which are cut into squares, dipped in egg white and flour, fried in a wok, and quickly tossed in sauce. It is described as being garlicky, tangy, and having an intensive sweet and spicy taste, while being crisp on the outside but tender in the middle. There was, in fact, a military leader from the Hunan province of China named General Tso who wanted to maintain Chinese cultural values during the Qing dynasty by keeping western colonizers out of China. Naming the dish after General Tso simultaneously gave the dish a sense of authority and bestowed upon it the value of “good food”—food eaten by a military leader. Cheney, Lee, and Murray seek to defetishize the dish by traveling to China to find out more about its origins.

The film argues that the dish is not authentically Chinese, as it is not recognized in China and would not have been consumed by the General because Hunanese food does not mix sweet and spicy flavors. The combination of sweet and spicy, or even sweet and sour, most likely developed in the diaspora. The film claims that General Tso’s Chicken could have two possible culinary origin points. The first is Taipei, Taiwan with Chef Peng Chang-kuei, who prepared the dish without sugar, and the second is in New York City with Chef T.T. Wang, who prepared it with sugar, making the dish sweeter to appeal to U.S. tastes. Although not addressed in the film, I am curious to know how U.S. consumers might react to the fact that General Tso’s is not “authentically Chinese.” Does such a distinction matter to them?

The third part of the film moves from Chop Suey restaurants to the proliferation of Chinese restaurants as a means of discussing the long and significant history of the Chinese diaspora in the United States, which has politically impacted its food history. As the influx of immigrants to the U.S. grew during the late nineteenth century, many people saw Chinese labor as competition and their food as foreign, as stated by Bonnie Tsui, author of American Chinatown. According to University of California, Riverside economist Susan Carter, “They [the Chinese] would have white mobs coming through their communities burning them out, tossing their stuff out into the streets.” Consequently, there was a sentiment among Chinese communities that exclusion actually meant extermination. According to the film, the 1882 Chinese Exclusion Act meant that many Chinese workers were forced to become self-employed. Many opened laundrettes and restaurants. Nativist citizens in the United States viewed Chinese food with skepticism, so restaurant owners adapted Chinese dishes to U.S. tastes. Such modifications allowed them to make money and gain social and cultural acceptance, efforts that also resonate with immigrant communities today.

According to the film, around the year 1900, Chinese restaurants began to adapt dishes, like Chop Suey, to suit mainstream white audiences. Chop Suey allowed white U.S. audiences to interact with Chinese food in a “safe” manner. Consuming foods of this kind was a “safe form of multiculturalism,” allowing the cosmopolitan consumer to interact with “the Other” from a distance without getting politically involved. Jennifer 8. Lee asserts that the popularity of Chop Suey allowed for Chinese restaurants to proliferate across the United States. These restaurants began to serve different variations of Chinese dishes that integrated regional foodways, as evidenced by the film’s demonstration of Szechuan alligator preparation, served at Trey Yuen in New Orleans. The restaurateurs interviewed in the film acknowledge that these are not “authentic” Chinese dishes but are Chinese-American, which is a style of cooking in itself. These kinds of dishes can be interpreted as hybridized, neither Chinese nor American, but rather something between the two, and, in the case of New Orleans, an expansion of creole cuisine.

For me, Chop Suey represents the geopolitical power of food. According to the filmmakers, although Chop Suey and other Americanized Chinese food became popular by the 1940s, their popularity declined during the 1949 Revolution. At that time, Chinese food was intricately linked to politics and the perception of Chinese immigrants. The Revolution tarnished the image of China, Chinese people, and Chinese food in the eyes of mainstream citizens of the United States. Eventually, this perception changed with Nixon’s 1972 visit to China, where he was seen eating Chinese food. This moment of cultural exchange suddenly sparked a positive trend of Chinese food, renewing its popularity.

Interestingly and perhaps most importantly, the film acknowledges that there is no such thing as Chinese food. Chinese food, like Indian and Iranian food, is regional. Such variation makes it difficult to define authentic Chinese food. For the restaurant owners and academics interviewed throughout the film, authentic Chinese food is supposed to provide a taste of home. My own research on diasporic Iranian food in the U.K. and Canada also shows that authenticity is associated with a taste of home. I have found that traditional Iranian foods, such as stews, are considered to be home dishes, usually cooked by the mother or grandmother. These patterns have also led me to conclude that nostalgia is gendered, given that restaurant culture is associated with masculine chefs and domestic dishes with women’s food production.

Overall, The Search for General Tso does a terrific job of tracing the origins of General Tso’s Chicken, highlighting the role of food as a cultural material that plays a central role in (re)defining identities and producing a shared sense of collective identity among diasporic communities. The most remarkable, and perhaps slightly underexplored, part of the film involves the ways in which Chinese food has become synonymous with the Jewish community in New York, a relationship which shows that one diasporic community can cater to another through food.[1] Although Chinese restaurants have become embedded in the urban landscape, menus were first standardized and adapted out of necessity for specific audiences and contexts, allowing businesses to play it safe and reach a wider clientele. However, the presentation of standardized menus can also lead to homogeneity. Jean Duruz refers to these homogenized foods and standardized menus as “fortress cuisines.”[2] In addition, David Bell sees such typical dishes, like Chop Suey, as an attempt to “museumify and mummify” foods, making them fixed entities rather than living cultural forms.[3] In order to accommodate a non-Chinese clientele, the food produced by Chinese and Chinese-American restaurants must be negotiated and transformed which, in the formulation of Netta Davis, is “both ‘unauthentic’ fabrication and the product of an ‘authentic’ cultural adaptation.”[4] Thus, diasporic foodways are symbolically loaded and carry connotations of ethnicity, otherness, authenticity, identity, and obfuscation.

Priya Vadi is an independent scholar focusing on research that explores public performances of diasporic Iranian identities in London, U.K. and Vancouver, B.C., Canada through food in terms of spaces of production, consumption, and representation. In particular, Priya examines the role of Iranian restaurants and grocery stores as representations of diasporic Iranian culture.