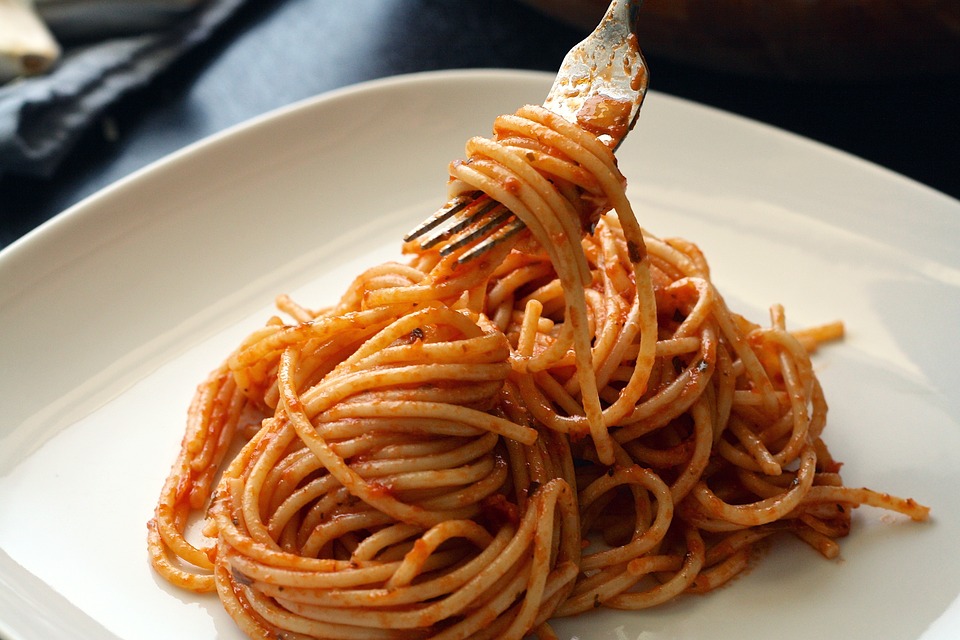 “Most dishes lack a discrete origin because recipes exist as a complex array of many things rather than a singular identity, or so posits Massimo Montanari at the beginning of A Short History of Spaghetti With Tomato Sauce, a slim volume recently translated by Gregory Conti. The marriage of spaghetti and tomato sauce rivals such renowned culinary pairings as peanut butter and jelly or fish and chips, but also serves as a metonym for the cuisine of Italians. In seeking the origin of the dish, Montanari creates an entry point to discuss identity broadly in a context of a national identity within the global community.

Montanari is a medieval historian and food studies scholar based in Bologna, Italy, the founder of the review Food & History, and author of the sweeping cultural history, Italian Cuisine. His latest book, first published in Italian two years ago, focuses on two elements: spaghetti and tomato sauce. Beginning with the origins of pasta, macaroni, and spaghetti, Montanari departs from the primary objective of locating the origins of spaghetti and tomato sauce to provide background on ingredients such as garlic, oil, and chili peppers, and condiments like cheese.

Exploring other ingredients provides space to contextualize tomato sauce and pasta, showing how this iconic dish is assembled in a broader field of food histories and global connections. For instance, peppers, like tomatoes, arrived in Italy from the Americas, and similarly had a profound impact on flavor throughout the peninsula. Access to chili peppers helped democratize spices, previously the realm of the wealthy, until they eventually became a common way of cooking. Today, chili spice is an implied ingredient left to the discretion of the cook, similar to instructions to salt a dish to taste. The pepper also speaks to the larger argument Montanari is making about the multitude of experiences transforming identity. Peppers today are, like salt, a ubiquitous seasoning for Italian cooks and belongs to the identity of Italian cuisine, despite it not being a native plant to Italy.

In regards to the origins of how spaghetti and sauce came together, Montanari has unearthed numerous recipes and sources. Beginning with Antonio Latini’s Spanish-style tomato sauce intended for boiled meats (79), he cites examples in France and Naples, as tomatoes transitioned from an oddity to a commonly available ingredient, leading to general acceptance as a sauce for “meats, fish, eggs, pastas, and greens” (81). Montanari cites cookbooks like Ippolito Cavalcanti’s Cucina teorico-pratica where he suggests differentiating the tomato sauce flavors for whether it will dress meat or macaroni (83). He also finds accounts of how the sauce is normalized among the population of Naples, such as in Matilda Sarao’s Il Ventre di Napoli providing an account of taverns in working class neighborhoods (84). In just a few hundred years, tomatoes transitioned from an unknown food to an essential part of Italian identity. Montanari’s interest in how Italian is formed through the intersection of ingredients in cuisine occurs alongside his reconstruction of the chronological history associated with the migration patterns of ingredients.

Montanari illuminates valuable details for readers providing early sources of recipes, such as Latini’s 1692 manuscript, Scalco alla moderna, and uses of tomato sauce in the independent Italian states; beginning with the introduction of the tomato and up through widespread consumption in the south of Italy. Social historians following food pathways through Italy may find the text useful, since Montanari speaks to the transition of foods through social class and geography, with examples drawn on cookbooks like Pellegrino Artusi’s Science In the Kitchen and Art of Eating Well.

The history of food isn’t the only point of this monograph. Montanari’s intent is as much about examining who we are, and that “searching for the origins of what we are may just be, therefore, a way of getting to know others” (104). Threaded throughout the book, the discussion on Italian identity has a broader appeal beyond the academic researcher. Italian culture and food are interwoven, but neither are static: both contain multitudes of experiences transcending a singular Italian or Italian-American identity.

The playfulness of Montanari’s style and inclusion of personal anecdotes in the book appeals to general readers and food enthusiasts. For instance, Montanari describes the 1957 BBC broadcast featuring the spaghetti tree, a fictional account of how spaghetti is grown (103). The gag ran as an April Fool’s Day joke, but some confused viewers believed it was real. These asides anchor the academic research with entertaining narratives, including vignettes that help illustrate the broader connections of identity on the global scale. Spaghetti and tomato sauce is synonymous with Italian food, yet such misconceptions as a spaghetti harvest can still beguile non-Italians. While Montanari crafts a succinct narrative on this dish and its elements, there are other more detailed resources focusing on the histories of each ingredient. For instance, Oretta Zanini De Vita’s Encyclopedia of Pasta offers far greater detail in regard to the history of shapes and sizes and geography. Andrew F. Smith’s or David Gentilcore’s books have a more detailed picture on the tomato.

Ian MacAllen is the author of Red Sauce: How Italian Food Became American (Rowman & Littlefield, April 2022). He is a writer, editor, and graphic designer living in Brooklyn.