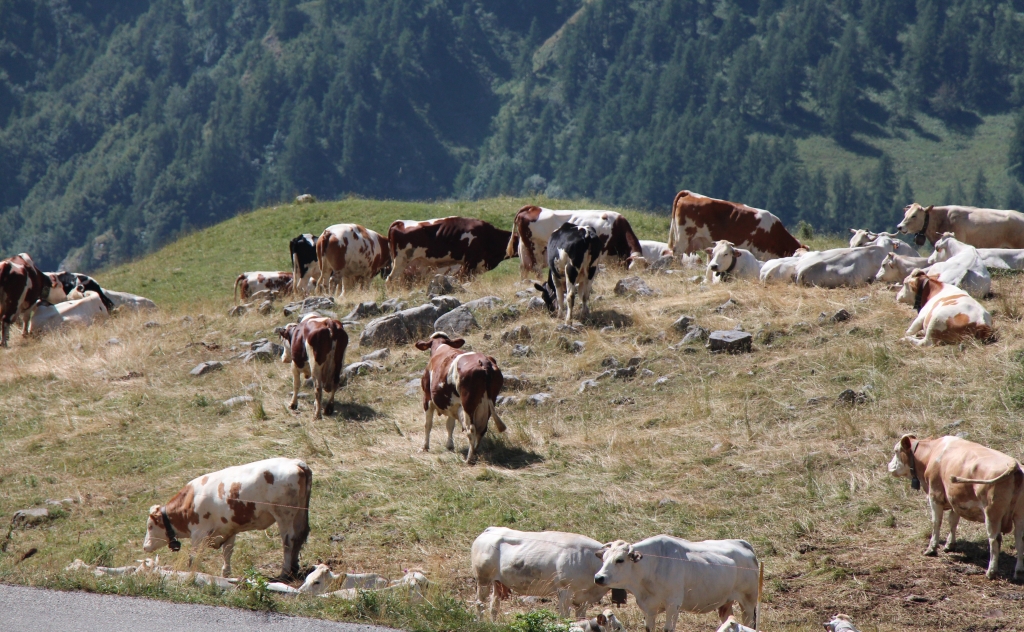 Carol J. Adams has published several well-known works on human and nonhuman relationships, including The Sexual Politics of Meat and Neither Man nor Beast.[1] In 1997, she wrote the essay, “‘Mad Cow’ Disease and the Animal Industrial Complex: An Ecofeminist Analysis.” Adams bases her article on ecofeminist work by Karen J. Warren, who writes: “(i) there are important connections between the oppression of women and the oppression of nature; (ii) understanding the nature of these connections is necessary to any adequate understanding of the oppression of women and the oppression of nature; (iii) feminist theory and practice must include an ecological perspective; and (iv) solutions to ecological problems must include a feminist perspective.”[2] Adams begins her article by describing the possible link between Bovine Spongiform Encephalopathy (BSE) and Creutzfeldt-Jakob disease (vCJD). BSE, or “mad cow” disease, was first identified in cattle in Britain in 1985, but it was not until 1996 that the British government announced the possibility that a disease could manifest itself in humans as vCJD. Adams explains that “part of the motivation for writing this essay was the anger and horror I felt in response to the entire crisis as it unfolded after March 20, 1996. The mad cow crisis highlighted the glaring indifference regarding the lives of other animals who have been ontologized as usable. What was new in the mad cow crisis was not this ontology but the unquestioning adherence to it” (28).

Firstly, Adams asks why the term “mad cow” is used as an alternative name for BSE. She explains how a female cow’s reproductive labor enables the production of milk for human diets. Furthermore, she is clear that the disease is unable to manifest itself without a “working” dairy cow because only these cows are allowed to live long enough for the symptoms of BSE to materialize. Male calves, who offer no value in the production of milk, are sent to slaughter at a younger age thereby entering the meat chain. Adams describes how the dairy cows that contract the disease are already “so degraded [through the exploitation of their reproductive labor] that their further degradation by the disease—and the popular title given the disease—functions as confirmation of their degraded status” (32). Moreover, the British cultural use of the term “mad cow” denotes a hysterical woman. For Adams, meat consumption is gendered and often sexualized. For example, advertisements and menus are made to appeal to male consumers by using terminology such as “best breasts” or “best thighs.” Meanwhile women are animalized as they are often depicted either on all fours or in positions which are animal-like. In other words, the use of the “mad cow” metaphor illustrates the “oppositions between the hysterical female and a nationalist male beefeater identity: the uncontrollable and violable female, the controlling and powerful beefeater” (33).

Secondly, Adams’s attention turns to the patriarchal worldview. Historically, men have been positioned as morally superior to women, nonhuman animals, and nature. According to patriarchal logic, since humans are superior to animals, they have the right to eat animals (34). This constructed superiority of humans over animals may have contributed to perceptions of BSE. It was not considered possible that a disease manifested in a nonhuman animal could be transferred to a human. With the acknowledgement that the disease could transfer to humans, this hierarchy between humans and nonhumans was undone.

Thirdly, Adams examines the association of environmental issues with meat eating. She argues that “[o]ne of ecofeminism’s attributes is its concern with the consequences of the domination of the Earth. The relationship between eating animals and environmental disaster is measurable” (39). For example, an individual’s use of water depends on her diet: in the United States, a person following a vegan diet (without dairy or eggs) requires 300 gallons of water a day, a vegetarian diet (with dairy and eggs) requires 1,200 gallons, and a carnivorous diet requires 4,200 gallons. Moreover, livestock manure is a major polluter of waterways. Adams describes the environmental cost of feeding animals: forests must be converted into grazing fields, or crops are grown on arable land for animals to eat (as opposed to being directly consumed by humans). In fact, no matter how efficient raising animals for meat consumption becomes, meat eating is still an inefficient way to feed humans. It takes “21 pounds of grain to produce one pound of beef, and…an acre of land devoted to cereals could produce five times as much protein as an acre devoted to meat production.”[3] The issue of diverting food crops such as oats for animal, as opposed to human, consumption relates to the introduction of animal by-products into cattle diets. Some rejected body parts of cows, sheep, and other animals are manufactured into products such as soap or margarine. However, at the time of the BSE crisis, these rejected animal parts were also used as animal feed. Cattle were functionally transformed into carnivores, having been fed parts of other animals. This tampering resulted in the emergence of BSE, given that contaminated cattle feed helped to spread the disease.

Finally, Adams examines how solutions to ecological problems must include a feminist perspective. During the BSE crisis, the government’s response was to continue with “business as usual.” An ecofeminist perspective, as described above, offers alternatives to the conventional approach, which might have been used to realize positive opportunities following the crisis. The affirmation of human-animal relationships whereby animals co-exist with humans, rather than being dominated by them, makes animals more than meat. Instead of trying to restore confidence in the meat industry, Adams calls for an end to the practice of eating meat.

It is worth remembering that Adams authored this essay in 1997. Nevertheless, it feels very much as though it were written in 2018. Many of the issues that Adams raises still persist, especially the dominance of humans over animals. Adams offers many solutions that have not been taken up, and animal exploitation continues. The environmental problems generated by farming animals continue unabated, and the quantity of crops grown for animal feed is increasing. Arguments are often made regarding the need for new scientific developments to feed a growing population. However, if consumers ate less meat and directly consumed cereal crops, there may not be the need for these scientific advances. Adams’s arguments are convincing. However, her solutions remain controversial and the dominant culture of meat eating in the United Kingdom seems unlikely to change in the foreseeable future. Yet, Adams argues that individual actions should not be ignored. Today, the number of individuals choosing vegetarian and vegan diets is increasing.

In comparison to Adams’s other work, her article on “mad cow” disease is not widely cited. However, it has much to offer to the field of food studies. In it, Adams describes sustainable development and the need to move away from industrialized farming processes. Clearly, the crises of BSE and vCJD have been a direct result of the food industry’s profit-seeking actions. The industrialization of farming makes both humans and animals suffer. However, while there has been an acknowledgement of humans suffering with vCJD, there continues to be a neglect of animals with BSE. Adams’ essay draws attention to that neglect.

Catherine Price is a PhD student in the Sociology Department at the University of Warwick. Her broad research interests are science communication and public engagement with science, particularly through the media. She is also interested in the representation of food in the media. Catherine’s PhD thesis examines the constructions of science, scientific expertise, and alternative expertise in the online GM food debate. In addition, it also examines the understandings of those who reject scientific facts and their reasons for doing so.