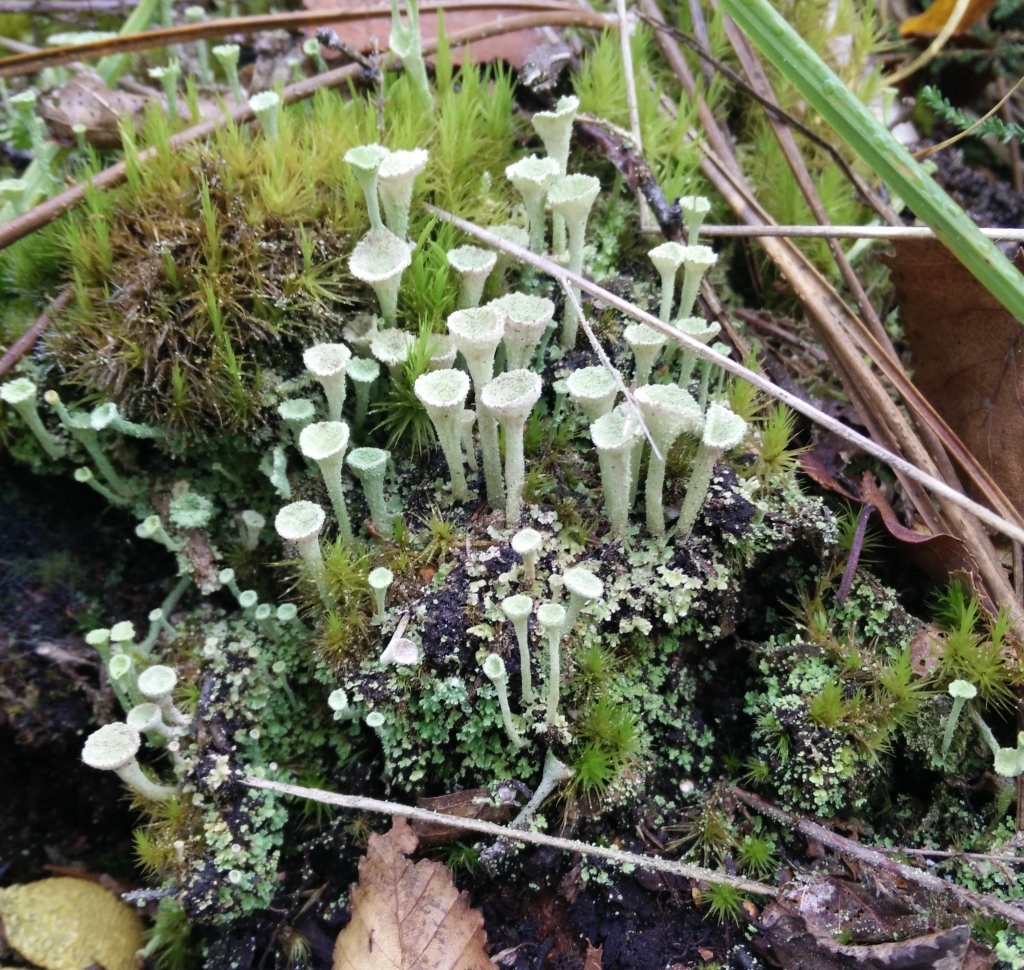 In 2012, Anna Tsing dedicated her “Unruly Edges: Mushrooms as Companion Species” to her colleague Donna Haraway, a scholar of feminist technoscience, new materialisms, and ecofeminism. In 2003, Haraway conceptualized “companion species” as a way to address how we attend to more-than-human relations, using her dog Cayenne as a heuristic to theorize ethical living and entanglements with other species.[1] Tsing builds on Haraway’s argument that fungi, as companion species, have historically affected and been affected by material (fleshy) and semiotic (discursive) relations with human life.

Tsing traces the history of fungal domestication and connects it to European models of conquest and hygiene. For example, she suggests that processes of racialization emerged from sugarcane plantations, which quickly profited from fungal (yeast) fermentation of the plantation’s byproduct (molasses) that yielded rum. Tsing connects the materiality of rum to its sudden boom in Caribbean trade due to “sea-faring masculinities” that enabled the domination of land and peoples: “[f]ermentation thus detracted attention from the cruelty of shore-bound domestication, both human and nonhuman” (149). Similarly, Tsing explains that nineteenth-century hygiene practices were borne of colonial scientists’ occupation of jungle lands, whereby “white women became responsible for maintaining the boundaries—of homes, families, species, and the white race” (149). Here, Tsing blurs the line between metaphorical and literal separation in embodied difference (e.g. race, class, and gender), considered agents of disease and infection. Material things—rum, mosquitos, or the boundaries of a home—enabled ideologies of exclusion.

Echoing Tsing, we argue that material-semiotic relations matter in the context of food research. Food studies and adjacent food-oriented disciplines seem to pay a growing attention to not just what food is but also what food does in the context of access, subversion, and meaning-making; and, it is in this shift that the material-semiotic combination provides an analytical toolkit for decentering normative power relations in ecological and social environments. Tsing’s work exposes the anthropocentric and ethnocentric narratives that privilege certain forms of life over others. Applied to food studies, attention to the material and the semiotic allows us to scrutinize the inherent power relations in food practices and food knowledge.

In addition to the material and the semiotic, we contend that a third dimension be considered: the speculative. Literary genres such as speculative fiction provide an opportunity to ideate a future while highlighting problems in the present.[2] Some feminist thinkers have relied on speculative fiction to ideate other worlds, making the case for “opening up what is yet-to-come in protean entangled times’ pasts, presents, and futures.”[3] Researchers in design fiction and speculative design have proposed “what-if” scenarios, sketches, artifacts, and prototypes to envision “products and services that do not exist yet.”[4] Surprisingly, such imagination-oriented inquiry is largely absent in contemporary food studies research.[5]

Our essay embraces the possibility of taking speculation seriously as a mode of scholarly food inquiry. It applies the lens of speculative fiction while looking to imagined food futures that reflect on the troubled present. Though brief, Tsing’s essay differently imagines the relations between fungi and (certain) human species, and it is this work that inspires us to look into possibilities, potentiates, and plausible what-ifs in the context of food worlds.

In 2048, humans finally realized that they are running out of animal protein and neither lab-grown meat nor Soylent™ or crickets will solve their hunger. A small group of nutritional visionaries—also known as “Ethical Cannibals”—started fantasizing about human-fungi symbiosis as a direct source of the much desired animal-based nutrients. Asking themselves, “Can we tweak our gut and skin microbiome to grow edible fungi on our own—fungi that we can later eat and share with our loved ones? What if we become gut gardeners, using the ambience of our intestines to create conditions for new and unexpected microbial interactions?” In this way, Ethical Cannibals turned their physical bodies into fungi farms.

Cultivating edible mushrooms directly on their own bodies became a novel “ethical” way for humans to feed themselves in times of food scarcity. It was certainly more ethical than the early twenty-first century lab-grown meat methods, which relied too heavily on ingredients such as bovine serum and disposable plastic. In contrast to lab-grown meat, human-based fungal crops were fully accepted by vegans and food hipsters of all kinds: while preserving the appearance of plants, the edible mushrooms did not visually promote meat consumption; while grown on human bodies, they had the nutritional properties of animal protein. Receiving wider public recognition as the “NutriFungi,” the human-fungi nutrition became a 2048 food blockbuster.

However, the NutriFungi trend did not stay within the sole realm of nutrition: human-fungi exchanges were soon recognized as a popular form of social bonding. Ethical Cannibals realized that feeding their self-grown fungi to others was a profoundly intimate act of love and care—similar to that of mothers feeding breast milk to their offspring. Expanding beyond the intimacy of the family circle, some Ethical Cannibals found that sharing their NutriFungi was an opportune occasion to develop new social—romantic or professional—relationships. Ethical Cannibalism soon expanded into a larger “tribal” phenomenon: new types of social and territorial collectives emerged, whose members subsisted on the same strain of NutriFungi.

While sharing and eating the very same NutriFungi, members of distinct tribes gradually aligned their gut and skin microbiomes and, hence, their physical as well as emotional features and preferences. However, different body odors, moods, senses of humor, and other personal traits influenced by the microbial composition of one’s body became obstacles for inter-tribal bonding. Soon, it became impossible for members of different tribes to tolerate each other. Although initially a revolutionary product, NutriFungi eventually became an impetus for social chaos and hatred. New social class divisions propelled by NutriFungi consumption emerged and fungi-driven geopolitical conflicts expanded globally. “Monsanto monocrops; the great fallacy of Silicon Valley white men preaching techno-social revolution; even the stupid lab-grown meat—did we not learn anything from these historical failures to solve food system problems?” cried the Ethical Cannibals.

However, they did not cry for long. In 2084, a group of NutriFungi species, who could no longer stand listening to humans whining about their bad food choices, decided to act. Finding the monocultural life within the single tribes of Ethical Cannibals hostile and unfavorable, these NutriFungi visionaries initiated an inter-tribal migration. Using the traditional power of wind, they started dispersing their spores across the tribal borders, hoping to increase the microbial diversity in Ethical Cannibals’ guts. Luckily for Cannibals, the brave NutriFungi eventually succeeded and managed to restore cultural diversity across societies as well as in people’s guts.

Following this fungal intervention, the world kept thriving in harmony. The Ethical Cannibals acknowledged the agency of NutriFungi, considered them an equal species, and cohabited with them for centuries to come.

Maya Hey is a Vanier scholar and PhD candidate in Communication Studies at Concordia University. She completed her Master’s in Food Culture and Communication at the University of Gastronomic Sciences and holds a BS in Nutrition, Dietetics, and Food Administration. Her doctoral research examines fermentation and feminist theory, particularly attending to questions of power, performativity, and material practice. She tweets at @heymayahey and shares visuals on her Instagram feed, @heymayahey.