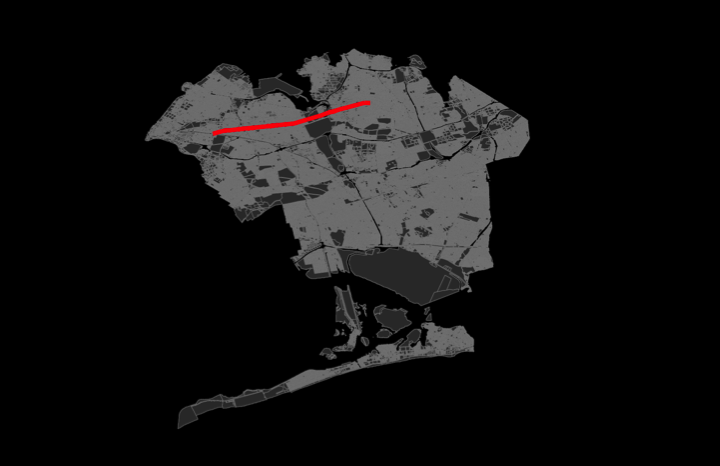 New York City is home to approximately 24,000 restaurants employing more than 200,000 people.[1] As a result, its restaurant industry is globally renowned, contributing billions of dollars to the city’s tax revenue every year,[2] and making it one of the world’s top culinary destinations.[3] Due to a number of constraints in the formal labor market—such as racial discrimination, language barriers, compulsory work permits, and unfamiliarity with cultural norms[4]—foreign-born migrants have significantly contributed to the restaurant industry because of their tendency to accept the low wages and difficult jobs that are common in the hospitality industry.[5] After gaining experience working in restaurants, some migrants find operating food-centric businesses one option for achieving upward mobility.[6] Even with the excessive competition, narrow profit margins, and high risk of failure, low capital requirements make it possible for foreign-born entrepreneurs to enter the business of feeding others.[7] Knowledge of cultural traditions of taste also gives them a competitive edge over better-capitalized entrepreneurs. Kin networks, which can be utilized for unpaid labor and the informal lending of capital,[8] are another reason why 69% of New York City’s restaurateurs are foreign born.[9]

Unlike other major gateway metropolises in the United States, New York City does not host one dominant immigrant group. For example, while Dominicans account for the city’s largest foreign-born population, they only make up 12% of the city’s overall immigrant population, followed by Chinese at 11% and Mexicans at 6%.[10] Therefore, “border crossing” emerges as a critical part of everyday urban experience in streets, schools, markets, restaurants, gardens, and parks, where the negotiation of space, identities, values, and rights occurs through encounters with others.[11] While these quotidian modes of intercultural exchange facilitate sociality across difference,[12] they can also be places of confusion that engender violence and feelings of anxiety, rejection, and failure.[13] Restaurants, in particular, reveal how cultural traditions help shape spaces located within larger networks of sociocultural practices.[14]

To better understand how restaurants are catalysts for cultural adaptation, I turn my attention to Queens, New York City’s geographically largest borough and the nation’s most ethnically and racially heterogeneous county, where over 150 different languages are spoken.[15] Due to the area’s high concentration of immigrant-operated businesses, I focus on Roosevelt Avenue, a 5.8-mile corridor that runs east/west underneath the infrastructure of the Flushing Line in the western section of the borough. Starting west and moving east, Roosevelt Avenue runs through neighborhoods with some of the highest concentrations of immigrants in the borough[16]—Sunnyside, Woodside, Jackson Heights, Elmhurst, Corona, Flushing, and Murray Hill—making it the country’s most culturally diverse commercial thoroughfare.[17]

Between August 23, 2015 and November 14, 2015, I traversed the entire corridor by foot and bike, photographing and documenting all the restaurants along and adjacent to Roosevelt Avenue. I recorded the name of each restaurant, the type of cuisine it serves, and its address; I then imported the information into Geographic Information Systems (GIS). Using this spatial mapping software, I identified each restaurant along Roosevelt Avenue by a point and differentiated it by color according to the “type of cuisine” that is primarily served at the corresponding restaurant. In some cases, however, I broadened the “type of cuisine” code to regional areas to simplify the variation of spatial data. For example, South Asian refers to restaurants that serve either Indian, Bangladeshi, Pakistani, Nepalese, or Tibetan foods; restaurants coded as Peruvian also include Chifa, and Chinese restaurants with smaller supplemental menus of Mexican food are coded as Chinese. One limitation of this visualization methodology is that it is not particularly useful for identifying causality,[18] as it is unable to address questions like when, why, and how the hundreds of restaurants along the corridor assembled in this area. Moreover, the data collected does not reveal whether or not the type of food served at each restaurant matches the ethnicity of the entrepreneurs who own the businesses and whether or not they themselves are immigrants. 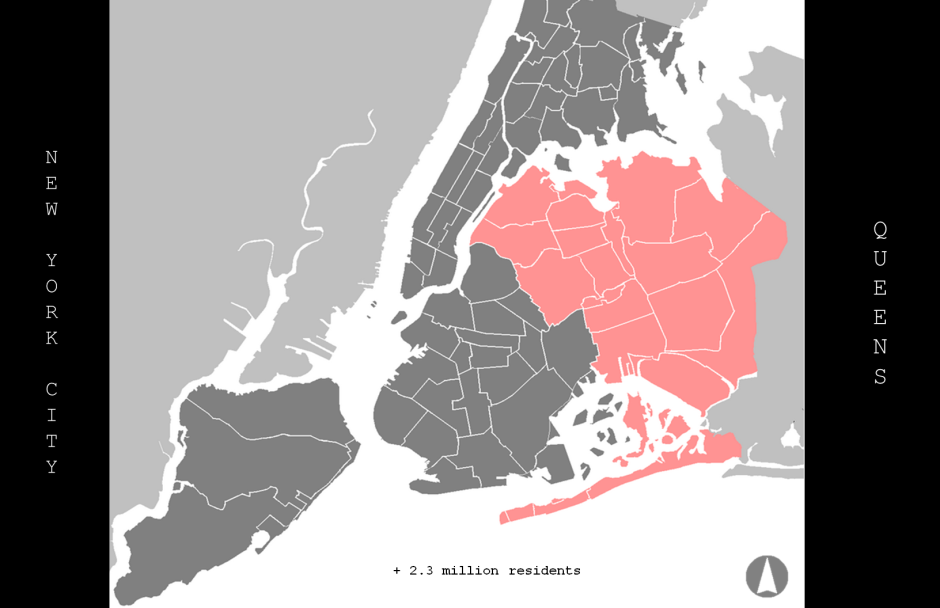 The majority of the mixed-use, one to three story brick-bound buildings lining the corridor that house these restaurants were constructed between 1922 and 1938, shortly after Roosevelt Avenue’s inception in 1917.[19] The buildings are designed simply and rely aesthetically on quality materials, proportion, and arrangement rather than applied ornament. The few structures that were constructed between 1951 and 2010 are difficult to point out from the older stock, as they are concealed behind bright awnings and obtrusive signage comprised in a variety of materials, colors, lights, languages, and typefaces. No matter the time of day, one can hear the sounds of cars honking and the cries of trains screeching and cracking on the elevated tracks perched above most of the thoroughfare. In the evening, and especially on weekends, the noise level is unsurprisingly amplified, as there are significantly more cars, revelers, loiterers, and vendors filling the sidewalks and the street.

Except for the stretch that runs through Flushing Meadows Corona Park and the small residential strip between Flushing and Murray Hill, restaurants dot a significant portion of the thoroughfare. A total of 394 restaurants can be found along (177) and adjacent to (217) Roosevelt Avenue, offering more than 25 different types of cuisines. The most represented cuisine along the corridor is Chinese, with 81 eateries, followed by Mexican with 54, and Korean with 46. Despite the competitive nature of the industry, restaurants offering similar types of cuisine cluster near the stops of the number 7 Subway Line. These restaurants benefit from an agglomeration economy—the idea that they can attract more suppliers and customers together than a single restaurant could alone. The type of cuisine served in areas where similar kinds of restaurants are grouped generally matches the top three demographics populating each neighborhood. However, South Asian restaurateurs prominent in the western section of Jackson Heights exist in a neighborhood primarily made up of Ecuadorians, Colombians, and Mexicans,[20] remnants of the neighborhood’s once prominent Indian population.[21] Today, such culinary ventures are sustained by the neighborhood’s smaller Bangladeshi, Pakistani, and Indian residents, as well as its growing Tibetan and Nepalese communities,[22] along with the South Asian residents in Greater New York City. These food business endeavors illustrate the outcome of transcultural placemaking in one of the country’s most diverse neighborhoods.

While restaurants are tangible places, actively produced through creative design and cultural commodification, they are also the outcome of intangible practices that give rise to meaningful processes of placemaking.[23] As a result, restaurants become a particular type of public space where cultural diversity is constructed, consumed, and negotiated.[24] Given that these graphic delineations illuminate the varied types of ethnic eateries along this single thoroughfare, they prompt the following question: how is difference negotiated through eating, working, and restauranteering?

Particularly since the mid-1970s, when New York City nearly went bankrupt, immigrants have been a driving force in making the city more safe, affordable, and attractive.[25] With the harsh anti-immigrant agenda outlined by the country’s recently inaugurated president, understanding the practices, ideologies, and customs of the “other” becomes imperative. A decline in immigration could disband neighborhoods and reproduce the difficult situation the city faced only a few decades ago. Specifically identifying immigrants’ successes and constraints will illuminate new ways to ensure spatial justice[26]—equitable distribution of resources, services, and human rights—in all geographies. It will also help dispel hostile stereotypes concerning foreign-born residents perpetuated by the xenophobia of our nation’s new leader. For the next four years and beyond, food will remain central to these issues of people, place, labor, and politics.

[5] Roger Waldinger and Michael Lichter, How the Other Half Works: Immigration and the Social Organizational of Labor (Berkeley: University of California Press, 2003).

[18] Bryan Preston and Matthew W. Wilson,“Practicing GIS as Mixed Method: Affordances and Limitations in an Urban Gardening Study,” Annals of the Association of American Geographers 104, no. 3 (2014): 510-529.

Noah Allison is a PhD candidate in Urban Policy at The New School. His research explores immigrant entrepreneurs of taste and post-industrial cities. His dissertation examines the interplay between immigrant restaurateurs, placemaking, and public spaces in NYC. Noah holds a BA in Architectural History & Criticism from UC-Santa Barbara, a certificate in Historic Preservation from the University of Southern California, and an MUP from California State Polytechnic University. He has over 7 years of professional planning experience and is currently a Principal Transportation Planner for NYC-Transit.